We had interview with Silvia Alberto

Four women will present the 63rd Eurovision Song Contest, which will take place this year in Portugal’s capital city, Lisbon. We have an interview with Silvia Alberto, one of the four presenters! We talked about her career and Eurovision.

– Can you talk about yourself for us?
What would you like to know. I’m 36, I’ve been a presenter since I’m 19. I’m very proud of my country, Portugal, I really like to live in Lisbon, but I’m also a traveler. I like to explore the world backpacking, to know other landscapes, cultures and other realities and I always try to bring joy and a smile with me.
– How did your career in being a presenter start?
I started as Disney Club presenter at the age of 19. After a long lasting casting I was chosen along with two boys. Together we rode the country in the Disney caravan. We did live shows, scketches, interviews. It was a very happy beginning. From there my name began to be spoken by some people, that’s how I jumped to the radio and to television, where I started as a reporter until I had the opportunity to do the casting for Pop Idol. The program was a phenomenon in television in Portugal and from then on I have never stopped. From ‘Masterchef’, ‘Top Chef’ to ‘The Brain’ and ‘Got Talent’ I have always been in the entertainment and always discovering talents.
– You have attended and graduated from School of Theatre and Cinema, why did you choose to become a presenter and not an actress?
Because I took course as a dramaturgist and not as an actress, even though I had initially thought about it. Later, when I had the opportunity to take the time to do my training, it no longer made sense for me. I preferred backstage, texts, content.
– Moving forward to Eurovision, how did you receive the offer of being the presenter of the show, can you tell ua about this process?
I was not in Portugal, so I received a written message, where my program director congratulated me on being one of the ESC presenters. “Welcome to ESC Silvia”.
– Four women will host Eurovision Song Contest and many people are acting biased towards this idea. What are your thoughts about 4 women hosting Eurovision?
Three women presented the national final, last year, which collided with the commemoration of RTP’s 60 years. Catarina and I hosted the event, on stage, and Filomena was on the Green room. When I knew that I would be one of the presenters, I assumed that RTP wanted to keep the same scheme. Daniela was a good surprise. They are 4 strong and very professional women and I am sure that together we will make a great show. 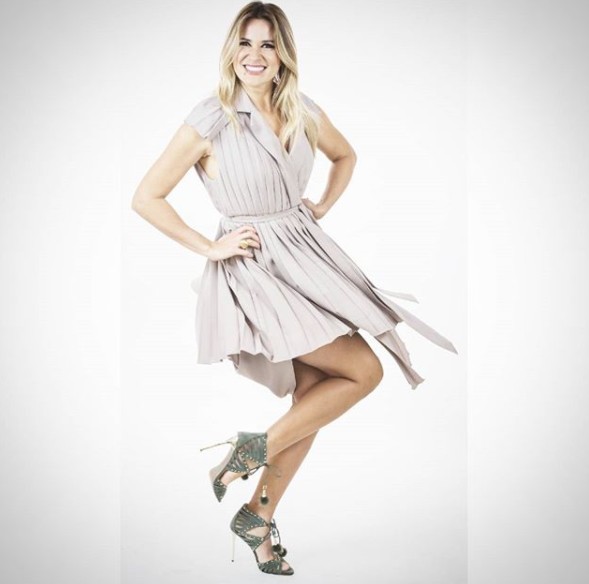 – Have preparations started? Is there any information that you can provide us?
Yes, at least for me the preparation has begun. As you know I was also invited to present Allocation Draw, which meant for me the first step taken in Eurovision. I had the opportunity to see the Eurovision stage in loco twice when I was doing the voice-over of the event. I was fascinated! Therefore, what can I desire more than step on the great stage of the Eurovision and host the show. And contrary to what has been reported by many Eurovision expert websites, none of the presenters will be on the backstage. It’s on the stage that I’m going to be along with Catarina Furtado and Daniela Ruah and Filomena will be in the Green Room.
– Portugal won for the first time since its debut. What do you think about Salvador Sobral’s victory?
Salvador’s victory was very special because of the profoundly symbolic value of overcoming, not only the artist himself, but a country that has made a tremendous journey of appreciation in the eyes of Europe, and which today arouses more curiosity and interest. From the definition of our national identity, the peculiarity of being Portuguese, the richness of our culture and our music. Portugal is in time to win victories and medals, and this encourages the Portuguese. This is what the Salvador did for us, made us smile with his incredible and unique attitude and believe.
– Have you been following Eurovision Song Contest before? Do you have any favourites from previous years?
In Portugal I presented the last eight editions of the National Festival where the songs that were to represent us at ESC were chosen and I have always followed Eurovision. I highlight Loreen, in 2012 with the hit, Euphoria. In 2016 I was really cheering for Jamala, it was my favorite song, but I did’nt believe it was possible for her to win due to the strong message the song had in the political context of the time. I was really happy that the public voted for her. Seeing Salvador win after Jamala has of great significance, in the same way that Conchita Wurst had great significance in winning in 2014, when Austria itself had not believed so much in her at first. The interpreter and the song were indeed magnificent.
– Turkey has not participated to the contest since 2013. Do you have any favourites amongst Turkish entries? What are your thoughts about Turkey?
Unlike portugal Turkey had already won once in 2003. You know how to put on a good show and so it’s great to know you’re back in the competition. I really enjoyed your participation in 2004 with Athena, For Real and also that of 2012, Can bonomo with ‘Love me back’, but I could quote others, the one from Manga in 2010, for example.
–  Eurovision has a big fanbase in Turkey. Probably, you will have a chance to see many Turkish flags being waved in the arena. Do you have a message for the Turkish fans?
I have to say welcome! It’s good that Turkey is back. We felt your absence! Your country is on my list to travel to. I look forward to seeing you soon.
Paylaş
Facebook
Twitter
Önceki İçerik2018 sunucusu Silvia Alberto ile bir röportaj gerçekleştirdik
Sonraki İçerikİsveç’i Benjamin İngrosso temsil edecek!